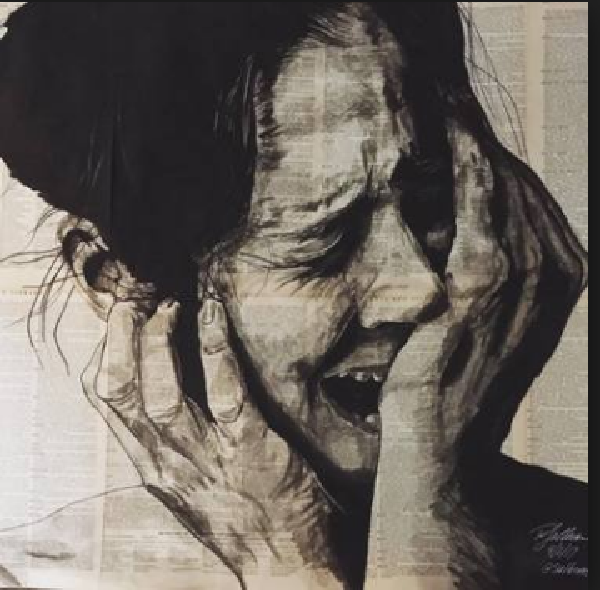 (If this is your first time, you probably should first read [The Dawn of Doom (Part 1)][1]

Candice is seated alone in the hallway leading to the school hostel, carelessly tapping away at her phone. She has grown to mellow in the joy of ‘blue-ticking’ humans. It gave her the ecstasy she craved for. It was the only thing that gave her hope in her now shattered life.

She glances once in a while at the oncoming human traffic, finally setting eyes on her prey. She first notices the shoes; blue suede with cram white laces, covering up to the ankles while leaving enough room for the trouser to rest on the ankles; then the black t-shirt, accompanied by khaki trousers

This was typical Claus. Something about the way he dressed had a spell on Candice, she silently wished he was all hers. But again, she had vowed never to love or lust ever again. Well, she could deal with lust but love, no single way.

Her head tells her she should get up and run towards him, but her body does the opposite. She suddenly feels very heavy. Her feet stall and she is emotionless. She is drained. So, she sits there and waits.

Claus pulls her into a passionate hug; those kinds of hugs that touch the bottom of the soul, those that literally sweep you off your feet. He squeezes her and she lets herself feel the warmth. She is at home, wishing to permanently live in that hug.

Candice: “You aren’t tired of that cliché? Be a man.”

Claus laughs at that. He holds Candice in so much esteem. She radiates a power that he can’t seem to comprehend. He feels a new when around her. But again, she is always the hardest nut you can crack.

Claus suggested that they go to a quiet place that day, and Candice hoped that she would be able to block the thoughts about her heartbreak; about the previous day’s ordeal that was still fresh in her head.

And so, the two toured the town, under the scorching sun that forced them to brush shoulders with others that scrambled for shades along the pavements, and that gave them more reason to laugh at their choices, their misery, their life. They formed part of the crowds that flooded supermarkets, fed their egos at the showrooms.

They laughed when they could; at the not-so-good-looking guys that flooded Candice’s inbox, their bald neighbour with a fake Swahili accent. Even then, Candice’s laughter was superficial. Her face laughed, but her heart sobbed continuously. Her eyes were sad. The cocoon of sadness was unwilling to let go of her.

Claus: “You sure you’re okay? You know you can tell me whatever is bothering you.”

Candice: “What do you want to do with it?”

Claus: “Come on. Don’t be so hard on yourself.”

Candice: “I am okay. Why are you having doubts?”

Claus: “There are two large pieces of untouched chicken on your plate. That’s not the Candice I know. Come on.”

Claus drops the matter. They eat in silence.

Sid: “Hey Candice. I might have an idea on how to get Ted talk to you.”

Candice: “Does that idea involve lying naked below a lamp post?”

Candice hangs up the phone then turns to Claus.

Candice: “Get dressed. We are going out.”

Claus: “Okay. Are you not going to dress up?”

Candice: “What is wrong with what I am wearing?”

Claus: “Hey, take a chill pill lady. I just don’t think you’re the type of girl who goes out in tights.”

Candice is seated next to Ted. From afar, they seem like a happy couple, with so much in between them, from dreams, to realities, to life, to love. In reality, no words between them; just cold air, anger, wishful thoughts, doubtful thoughts. And perhaps, just perhaps, regrets.

Drinks have started taking toll on its masters, as it’s evident by the uncountable number of empty bottles on the table, happy chatter and endless name-calling. Ted was talking to everyone else but Candice. In the background, Otile Brown’s Alivyonipenda was booming:

(Sometimes we do not love those that love us,

And everyone wants their type

At times we even reject those with dignity)

Sid throws a quick glance at Candice. Hopelessness is written all over her face, her shoulders fallen.

Sid: “Relax. The last part of that song is my favourite.”

People are bidding farewell to each other as Sid’s attempts to make Ted talk to Candice seem to bear no fruit.

At that moment, Candice knew she had lost it. Ted had managed to rip her soul, heart and mind off her. He had ripped her financially too. She was a stone now; incapable of everything human.

Candice is still struggling to get herself some sleep. There’s a lit cigar in her fingers, which she makes no effort to smoke. The smoke reminds her of her nights with Ted; nights when he crawled into bed smelling like a fume chamber; nights that however disgusting, her whole life had been tied to them. She wiped a cold tear. Then her phone rang. It was Ted at the other end of the line, signs that she was almost winning.

Ted: “No time for pleasantries missy. Let this be the last time we are hearing from each other. Forget I ever existed. Forget you ever saw me. And yes, I have a girlfriend that is not you. And don’t even think of trying to reach her.”

Candice managed to mumble a grumpy ‘okay’ just before he hung up. She let the phone fall freely to the ground, landing on the floor with a thud hath sent Claus straight from his sleep. Candice’s eyes wide open, tears streaming down to her chin. Sniffles. Sniffles. More sniffles.

In her mind, scenes of the fateful September 12th replayed in her head as she narrated to Claus the whole ordeal; from how she found out Ted was cheating, became too afraid to ask him, decided to stalk him and landed right in the nest of his other girlfriend, to the time when the other girlfriend confronted Ted and then things fell apart.

Candice and Ted have just got out of bed. Ted isn’t a breakfast person, so they unanimously skip that part of the routine. They both have errands to run at school, to which they jointly agree to go together. As Candice dashes to the washroom, Kenny Rogers and Dolly Patron’s Sometimes When We Touch is playing.

Romance and all its strategy

Leaves me battling with my pride

_ But through the insecurity_

Still trapped within my truths

_ And your hesitant prize fighter_

Trapped within your youth

_ Sometimes when we touch_

And I have to close my eyes and hide

I wanna hold you till I die

Till we both break down and cry

I wanna hold you till the fear in me subsides

At times I understand you

And I know how hard you’ve tried

I’ve watched while love commands you

And I’ve watched love pass you by

And at times I think we’re drifters

Searching for a friend

A brother or a sister

But then the passion flares again…

Candice loved to sing. Music was her soul food. She sang along to Dolly Patron while in the shower shortly before the music came to a sudden halt. There were sudden movements around the house that prompted her to immediately leave the shower.

Candice: “Why are your bags packed?”

Ted: “I am leaving. Something happened that needs my immediate attention.”

Ted tried to sound as calm as possible as he placed his last items into the small bag, but Candice could read the impatience in his eyes, the pretence in the way he moved and the anger depicted by the smirk on his face.

Candice couldn’t help but wonder whether it was something she had done.

Ted: “I’m leaving with your flash drive. I’ll find someone who will bring it back to you.”

Candice: “Don’t you think I deserve to know what is going on? Is it something I have done?”

Your sense of entitlement sucks the life out of my bones. Does everything have to revolve around you?”

Ted’s eyes were red-hot. Pepper-like. Candice shrunk. There was nothing else she could do.

With that, he banged the door and left.

Then followed a series of unanswered calls, un-replied texts until finally, her calls didn’t go through.

She beat herself up. Blamed herself for the rapid heartbeat, her inability to eat, her habit of continually falling prey. She couldn’t get her mind off Ted. She had been swallowed by a darkness she couldn’t explain. Depressed, she walked home. Nothing felt right any more.

After four days of insomnia, lack of appetite, endless calls trying to reach out, Candice finally resorted to live each day at a time. Some things will never be forced.

And that night as she bid farewell to Claus, she let it all go. She let herself be the woman she was meant to be.

Suddenly, all the songs made sense to her there and then. All along, they had been speaking to her in silence.