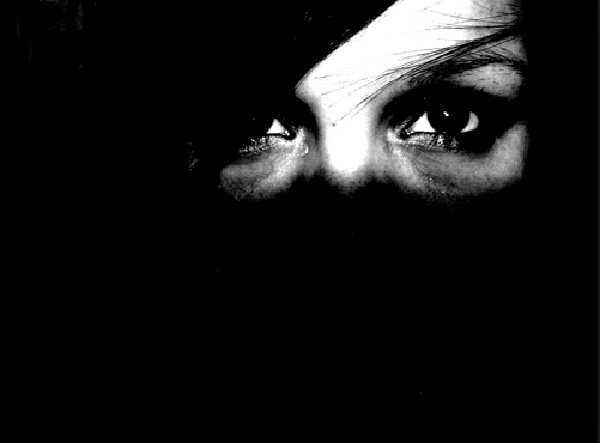 Candice is in her single shack of a room, damp air, dull curtains, poor ventilation; almost unfit for human inhabitation. She has become accustomed to the smell of ‘weed” outside her window, but this night it is a little bit too strong, the mesh net for a window acting as a sieve, letting in the “filtered’ smoke.

She coughs twice, then a pop up appears on her cracked phone screen.

Ted: “Now, the way you look, do I have any chance of having you as mine?”

Candice: “What are you talking about?”

Ted: “Your profile picture. You’re beautiful. You know that?”

Candice takes a minute to comprehend the picture in context. She admires her smile. It’s natural. Beautiful. It perfectly masks her pain, her distress and the voices in her head, constantly telling her that she can’t go on. She smiles at the beautiful mess she is.

Ted: “I’ve lied about things Candice. It’s like my whole life is a lie. But on this one, I have to be honest. You really are beautiful.”

For a moment, Candice is shocked. Honesty was a word so foreign in Ted’s world. It was like the sweet scent from a neighbour’s kitchen; the more you waft it towards you, the hungrier you get, your appetite insatiable.

It would satisfy her heart much more if she wrote a “back-off” reply or ignored the conversation (this is what blue ticks were made for). But again, it is this thing called control. Sometimes it is out of our reach.

Ted: Do I have a chance of making up for the wrongs? Do I have another chance with you?”

You see, the thing with life is that it gives us a whole lot of chances, only that most of these times, we choose to screw up the chances.

Candice: ‘You have all the chances Ted. All of them.”

Candice is impatiently tapping away at her phone. She repeatedly restarts the gadget. No response. No notification.

“Does my phone have a glitch or people are intentionally not whatsapping me?” She wonders.

The bedsheet beneath her is warm. Warm enough to jog her memory of her last encounter. There’s a trickle of sweat down her spine, which she makes no effort to get rid of. She loves the sensation, each body part having its own beat.

In the background. Justin Bieber’s Love Yourself is playing. She hates the song’s lyrics; the melody, the sarcasm. She hates everything about it. She hates the fact that Ted adores it; the hate too much that it turned to love. Now she has it on repeat.

I don’t but, you still hit my phone up,

Cause if you like the way you look that much,

Oh, baby you should go and love yourself,

And if you think that I’m still holding on to something,

You should go and love yourself.”

She silently wishes Ted was there.

She loves him. It outright scares her at times. Was it mutual? Many at times, she had managed to convince herself that scary was magical. Interesting. Spontaneous. She had convinced herself that for people like Ted, love meant suspense, holding back and seldom using the word itself. For Ted, love meant inconstant communication. Just routine checks twice a month, or once every week when the testosterone levels threatened to burst his testes.

Scary had become her form of love.

Candice: “Psssssst. Where you at? It’s freezing out here.

Ted: “Relaaaaax. I am at Bill’s place. I don’t think I will make it tonight.

Ted: “Can, I need to tell you something.”

She loved when he called her Can. She loved the shortened version of her name. Apart from her mum, only Ted called her that. The name lifted her spirits, made her head swirl and hair stand. It made her feel special. She felt loved.

But just not this night.

Candice: “What is that? Has prostate cancer finally caught up with you? I sure can deal with that. It just means reduction in…”

Ted: “Can, I want us to go back to what we used to be; before all this love menace came between us.”

Candice: “What do you mean?”

Ted: “I want us to get back to being just friends. We were so perfect as friends; dreaming of each other, illusions of forever. Just us.

Candice’s heart sank. Her vision blurred. She couldn’t feel her breath. She hoped she was still living in her dreams.

She hoped, hoped. Then hoped.

Candice wanted to eat him up; slice him bit by bit from the neck tendons, rejoice in the gush of blood that would stain her silk nightdress that she had worn for him. Then she would move to his ribs, tear them off one after another in a bid to confirm whether he too missed one.  Then to his thighs, piece by piece she would cut them off, and feed to her landlord’s blue-eyed cat. And she would cut open his chest, pull out his heart and place it at the farthest corner of her cheap freezer; so that every day she would look at it and be reminded of her frozen ‘state-of-the-art’ love.

She would leave his legs untouched, so that if decided to run, he wouldn’t make it too far. There would be blood stains everywhere he touched; a perfect warning to his would-be victims.

Candice: “If that’s what you want, okay. Back to friends.

Candice knew what this meant; no attachments, entitlement, feelings. Just platonic, she wasn’t ready for any of this. She wasn’t sure she could handle it. But again, it’s the thing that comes with love, compromise. And if that was what it would take to keep Ted around, she would give it her all.

But Candice knew she would never win an argument against Ted. He didn’t feel anything close to what Candice hoped he felt. It had always been a façade; like an egg balancing at the edge of a cliff.

Ted was egocentric. She wasn’t ready for a push that would lead to breakage.

Candice allowed herself to cry. No, she wept. The way Jesus dis in the Bible. She found solace in her tears; washing away her anger as they wet the pillow beneath her head. She let them flow freely like the rain, washing away bits of love, affection, betrayal, hurt. Washing away Ted.

Bancy is still rolled up in the white cotton sheets, breathing softly in her sleep. The morning rays through the bedroom window light up the area around her shoulder. She has a dragon tattoo on her upper arm, though it slightly looks like a dinosaur. It is a peaceful sleep. So, it seems. And she is a beautiful woman; loyal to her dreams, passionate about herself. She is so much more.

A thud on the maple wood flooring startles her from sleep. She opens her eyes and sees Ted disappearing into the bathroom. She waits for the shower sound, nothing.

She listens in. Ted is on the phone. He is doing his best to keep his voice low and he is winning. Bancy only hears grunts, slight chuckles, one-word answers from Ted (probably accompanied by nods).

One minute. Two minutes. Finally, Ted is out.

Bancy; “Who was that on the phone? You sounded nervous.”

Bancy: “They don’t necessarily have to be serious. So, who was that on the phone?”

Ted: “Since when does it matter?”

Bancy: “Well, since you became a lying and manipulative monkey, that hops from one tree to another in search of great fruits; who in the end of the day gets back to my house, demands for food, water, clothing and sex. Are you satisfied or do you need details?”

Ted: “Bancy please, I said I was sorry. It was a one-time mistake. The devil attacks when you least expect it.”

Bancy: “I swear Satan has taken blame for enough of your problems.”

Ted crawled back to bed, soothed her Bancy back to sleep and lay quietly beside her. He had a war in his head. He was torn apart. His whole world was crumpling. He needed out.